Hotels, AirBnBs, Inns, Motels, and Bread and Breakfast establishments are found across the world. From ultra-luxurious ones costing hundreds of thousands dollars for one night to cheap capsule hotels in Japan and hostels, you can find them everywhere.

In their essence, these establishments are built so people can have a place to rest their head and catch some shut-eye while in a new place. However, today, hotels are much more than a place where you find a bed.

Modern hotels are a place of comfort. Along with a place to sleep, they offer various other amenities that make the traveler’s trip more comfortable. There are basic hotels where you essentially have a clean bedroom and bathroom. Then there are lavish resorts with 5-star restaurants, spas, gyms, pools, bars, and other facilities.

The Beginnings of Hotels

Hotels, as we know them today, only made their appearance on the map somewhere in the 18th century. However, recorded history traces their existence back to ancient Greece and Rome. Back then – and maybe even before that time – hotels were more like lodgings. People had a place to sleep, which was built near toilet and bath facilities.

Like today, they were built along roads where caravans and nomadic groups were known to pass through. From the far west to the Middle East and across Asia, travelers could find accommodation and food. This was the norm until, in 1792, the first publicly held hotel opened in New York City. Since then, the hospitality industry has evolved into what we see today. 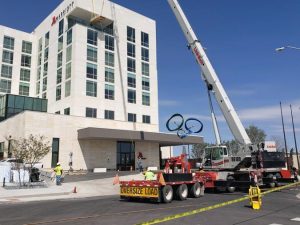 In modern times, hotels have become more than just lodging. While facilities and functions are important, appearances and aesthetics have become equally important. People are now looking for more wholesome and holistic experiences.

AAA Mustang Construction’s extensive experience in the construction industry allows us to meet these changing requirements in hotel construction. We understand that from the rooms to the lobbies, entrances, and the buffet room, every aspect of the hotel makes a difference.

In order to deliver high-quality results along with cost-effective, meticulous project management, we have assembled a team of highly-motivated professionals. Each team member brings their own unique insight and skillful hand, ensuring your hotel construction needs are met in full.

Our experience in the industry, along with a strong network with hoteliers, has taught us how to respond to the unique requirements of hotel construction. Unlike any other commercial and residential projects, we are well-versed in the problems and inherent opportunities in hospitality industries.

To comply with high industry standards, we undertake stringent policies and specialized approaches to maintain consistency. We take charge of all aspects of hotel construction, working with the developers and architects to realize your dream project.

A Gamut of Hotel Construction Services

AAA Mustang aims to not just build a hotel that not only satisfies the client’s requirements but also keeps the guests the hotel will welcome. From the pre-conception and site inspection phase of the project until the final wall is painted, we are well-equipped to handle the jobs from start to finish.

We can start from scratch and transform a plain stretch of land into a multiple story hotel. From putting up the bare bones of the building to laying down the floors, installing electrical systems, HVAC, plumbing, masonry, and more, we deploy the best manpower for each project.

If you’re working on something smaller, we are also prepared to work with existing buildings and renovate them into a bed and breakfast or small inn. Regardless of the size and complexity of the project, we believe in embracing innovation and executing the plan as per your liking. Our goal is to create spaces where travelers and tourists would find peace and comfort, along with the great hospitality of the hotel owners.

Types of Hotels We Construct

Motels and Budget Hotels
These small establishments are there to offer basic services and amenities, often to travelers who just need overnight accommodation so they can keep moving the next day.
Mid-Range Hotels
These are your average hotels like Holiday Inn or Courtyard by Marriott Inn. They are often preferred by families and business travelers who need a cheap place to stay near their location of interest.
5-Star and Luxury Hotels
These high-end hotels are the epitome of luxury and comfort. Establishments like The St Regis Princeville in Hawaii and The Plaza Hotel in NYC are two examples.
Resorts
Hotels with other facilities like casinos, pools, bars, spas, and other services are called resorts. The most popular examples are the MGM Resorts in Las Vegas.
B&Bs and Inns
Bed and Breakfast (B&B) and inns are smaller lodgings, often run by families. These can be super cheap or very upscale, depending on the services offered, the location, and the amenities.

New Construction
One of the main hotel construction jobs that AAA Mustang excels at is new constructions. We realize the potential in our clients’ plans and designs, materializing the architect’s brilliance in real life.

After careful planning, we perform ground-up constructions for every type of hotel out there. We have both the skill and expertise in construction to meet commercial construction challenges with cost-effective services.

We begin the project with a blueprint and end in a beautiful new construction standing tall for you to decorate and begin welcoming your guests.

Remodeling and Renovation
AAA Mustang understands some hotel establishments need a little bit of a facelift to bring them into the new century. While thematically historical hotels look beautiful preserved in their individuality, a little bit of interior remodeling can update them for the 21st century.

Since renovation and remodeling projects often involve working in operating hotels, these projects can be tricky. However, our team members understand these unique requirements and know how to work around them.

We execute the results with minimal impact on the hotel’s guests and employees. We are accustomed to public management and undertake proper safety measures to ensure the project site isn’t a danger to anyone.

If you require hotel construction services, just give us a call at (405) 875-5435 to find out more information or to schedule a consultation to get a quote for your project.